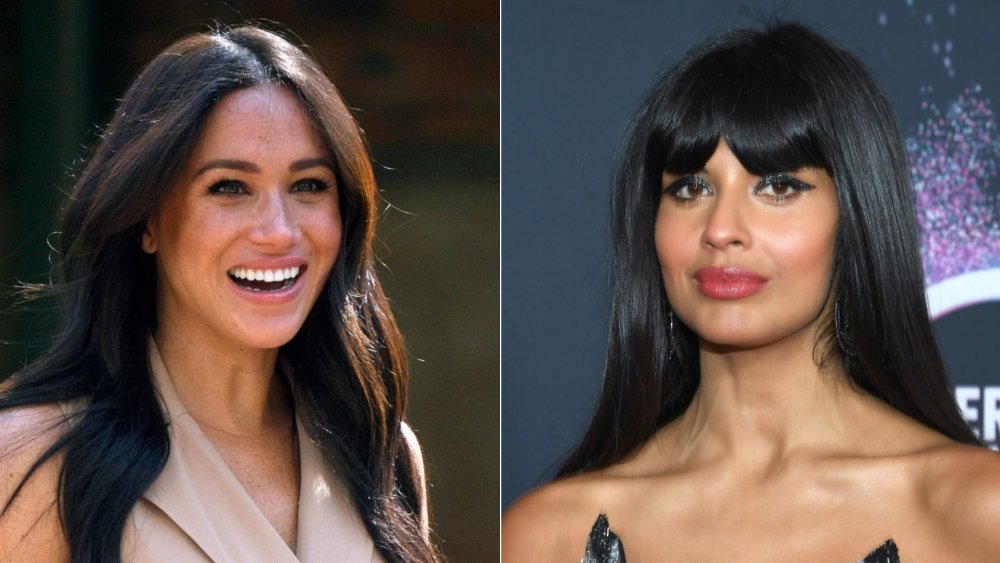 From Priyanka Chopra to Serena Williams to Amal Clooney, Meghan Markle has plenty of A-list friends. She comes from Hollywood herself, after all! So it’s no surprise that Jameela Jamil and Meghan Markle are pals, too. Both are outspoken about social justice and equality, so it’s only natural they’d form a bond. …Right?!

Well, it turns out that although the two women have a lot in common, they’re far from BFFs. In September 2020, Jameela tweeted that she’d « met this woman once » after reports circulated that she and Meghan were spending time together during the quarantine. If you see anyone claiming that The Good Place star and the former Suits actor are besties, don’t believe everything you read.

Granted, while the two celebrities don’t know each other super well, Jameela has still defended Meghan on social media against racist attacks from U.K. press outlets. « As someone who used to believe what I read in the papers, seeing how this machine works from the inside is truly extraordinary, » Jameela wrote in a September 2020 Instagram post. « Keep this in mind when you read about her, me or really any woman in media. Especially if she has any color to her skin. »

Obviously, these two famous women have an interesting dynamic, which is why you’ll definitely want to read on to find out more about their relationship. 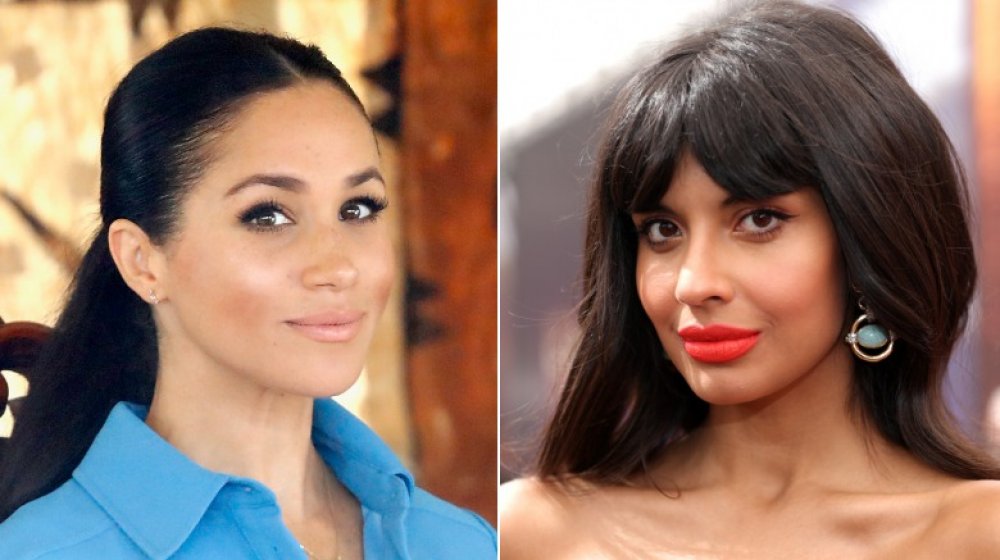 Prince Andrew has been linked to Jeffrey Epstein, a convicted sex offender, and The Good Place star Jameela Jamil has plenty of thoughts about the disgraced royal. In an August 2020 tweet defending Meghan Markle’s choice to speak out against President Trump, Jameela wrote, « I *THINK* they may be more embarrassed by their alleged resident pedo Andrew who was besties with a sex trafficker, than an American supporting women voting in her own country, and loosely referencing the importance of general democracy which is being threatened here currently. » According to The Daily Mail, the day after Jameela posted this social media message, she met Meghan in California.

« Jameela and James drove up to Montecito from Los Angeles and spent time with Meghan and Harry, » an unnamed source told The Sun, referring to The Good Place star and her boyfriend, singer James Blake. « They also had a stroll on the beach, but Meghan and Harry didn’t venture out with them. »

But The Sun‘s report should be taken with a grain of salt. Jameela slammed a Daily Express headline regarding the same visit, tweeting that the tabloids were trying to « create the lie that she controls me and coordinates my every move. »

Meghan may not have a domineering influence over Jameela, but the royal does think that the fellow star is an influential figure. 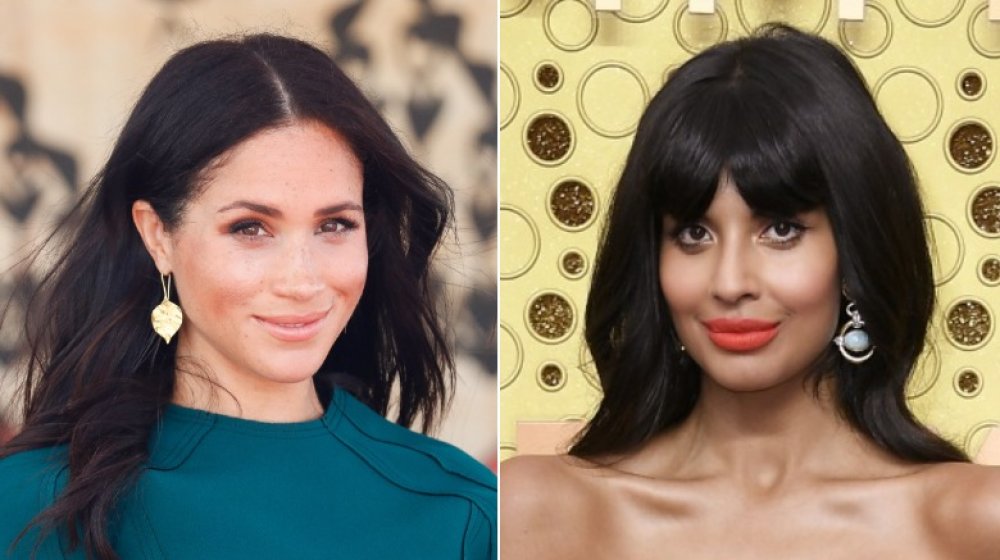 Back in 2019, British Vogue asked Meghan Markle to name « 15 Forces for Change » who are active in their fields, and the Duchess of Sussex included Jameela Jamil among her choices. Jamil used the opportunity to talk to the magazine about I Weigh, her body acceptance initiative. « My digital campaign against diet culture, I Weigh, has changed me, too — I smugly thought I would help all these people to recognize their worth, and they’ve ended up helping me, » Jameela told Vogue.

The Good Place star talked to Access Hollywood about the Vogue profile, explaining that she’d had a phone call with the Duchess. « She called me and told me how much she is invested in my work, in advocacy for women, and she was naming back things that I’ve done, » Jameela recalled. « It was just really cool to know that the support that I’ve had from the royals when it comes to I Weigh, my platform for female empowerment, general empowerment, that it’s not their publicists who made them support us. » She added that « they actually pay attention, they really care, and that’s really rare with celebrities because a lot of it is performative. » Beyond that, Jameela feels like « they actually do their research and their homework, » noting « that was really cool. »

While Meghan clearly has Jameela’s back, it works the other way around as well. 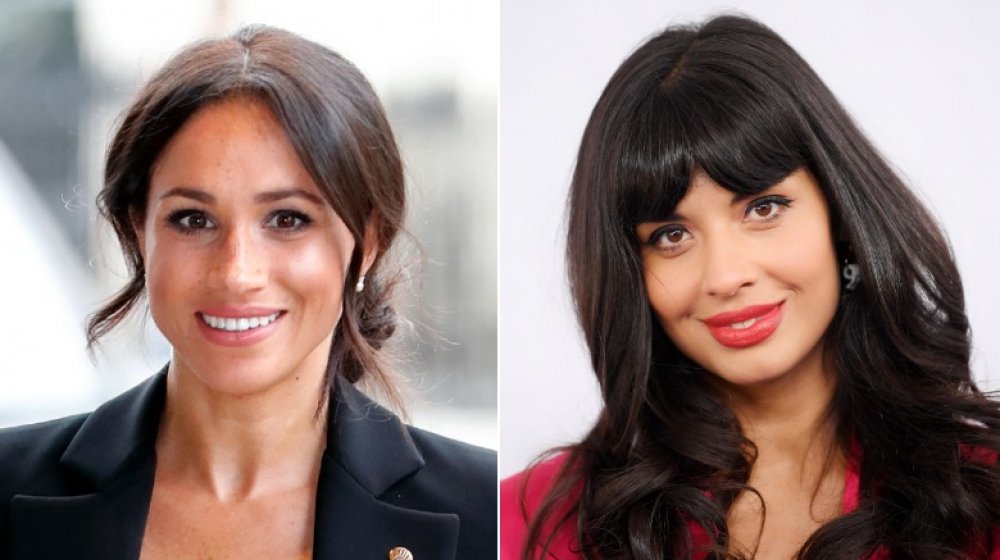 Jameela Jamil and Meghan Markle may not be best friends, but Jameela is still going to get involved when she sees targeted harassment against the former Suits star. « These articles are a strategy to now blame her for MY every word and move. And to attempt to discredit my calling them out as if it isn’t a *FACT* that they bully and harass her for clicks, to feed Britain’s already sturdy xenophobia, » Jameela tweeted in September 2020, referring to reports that she and Meghan had spent time together during the quarantine.

And in August 2020, Jameela tweeted another defense of Meghan when a fan asked why the Duchess of Sussex has received so much negative press. « Because she’s not white. And because she’s smart, strong, opinionated, rebellious, beautiful, happy and has everything they never will. She’s a terrifying threat to patriarchy because she doesn’t fit the stereotype for women, » Jameela tweeted, adding that « [t]hey discredit her because they can’t kill her. » She’s also tweeted that Meghan has been subject to « years of racially motivated abuse/harassment » by some U.K. outlets.

They’re not BFFs, but Jameela will always step in on Twitter if she sees Meghan being treated unfairly.